A Brief History Of Gorran Haven

In its sheltered position, with good fresh water streams running down to it and in a bay where shell-fish were abundant, Gorran Haven must have been settled from an early date.

Microliths of the Middle Stone Age have been found by Carn Rocks on the cliffs east of the village and nearby are Bronze Age tumuli. A tall quartzite pillar at Carn Rocks may well have had a ritual purpose for early inhabitants.

The sea level was then considerably lower and the Gwineas rocks must have formed a sizeable island. It could well have been the base for an early Christian saint, and its name may derive from Cornish “Gwyn-enys”, white or holy island. The medieval church in the village is dedicated to St. Just and that may have been his name.

The village was then known as “Portheast”, a corruption of “Porth-Just”, the cove of Just. In that period the inhabitants spoke Cornish and it was not until the 18th century that the language died out. 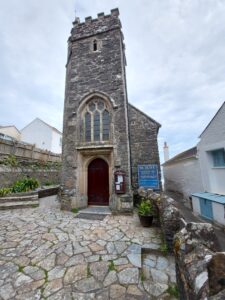 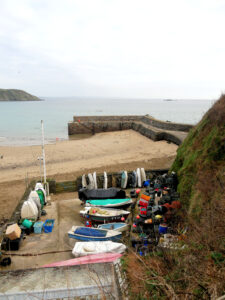 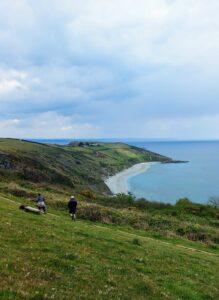 The first record of “seining” in Cornwall, the catching of pilchards with long nets, occurs in relation to the village in the 13th century. At this time Gorran Haven was a more important fishing centre than Mevagissey and it was not until the introduction of drift nets for fishing in the 18th century that that village became dominant.

In the early 19th century Gorran Haven – which by then, had been adopted as its name – experienced a downturn and its quay fell into ruin. In 1886 a new quay was built – believed to be the sixth on the site – and there was some recovery.

The village became important in the catching of crabs and lobsters and this continued until the Second World War but after that commercial fishing declined rapidly.

In the late 20th century Gorran Haven became largely residential, with many people retiring here. The old centre with its harbour however, remains.

It must surely be one of Cornwall’s most attractive coastal villages.

Manage Cookie Consent
To provide the best experiences, we use technologies like cookies to store and/or access device information. Consenting to these technologies will allow us to process data such as browsing behaviour or unique IDs on this site. Not consenting or withdrawing consent, may adversely affect certain features and functions.
Manage options Manage services Manage vendors Read more about these purposes
View preferences
{title} {title} {title}